There's a first time for everything, and it is said that the first impression of anything is the lasting one. I can't decree that the saying rings true in every situation, but for certain, it is a fitting one when it comes to the impression of my very first visit to the state of Missouri. 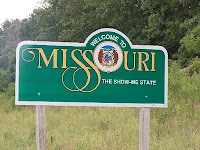 After eight years of being a published author and being favored with the opportunity to fly all over the United States and even travel abroad, it's even a bit mind-boggling to me when I realize that even with all of my traveling, there are still unchartered states on my personal map. At times, it may feel like I've been everywhere, but I haven't. And until Friday, June 11, 2010, Missouri and Kansas were two of the state lines I had not crossed. However, during my time serving as featured author and keynote speaker for the KC Girlfriends 3rd Annual Literary Retreat, I was blessed to visit both. 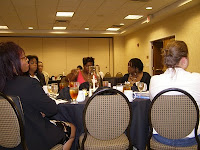 I had a wonderful time of fellowship! KC Girlfriends Book Club president, TaNisha Webb, extended to me the royal treatment from the time my flight landed. Upon picking me up from the airport, TaNisha wisked me away on a sightseeing journey which included an educational tour of The Museums at 10th & Vine (which houses the Negro League Baseball Museum and the American Jazz Museum). Man...I wish they allowed picture-taking in that place because it was jam-packed with awesome photos, official documents, and other memorabilia. I couldn't take pictures inside, so the best I could do was capture one from the outside. In addition, I had the pleasure of visiting Willa's Books, a local African American owned bookstore that is stocked with not only fiction and nonfiction books, but wonderful collector's items like early editions of Time, Ebony, and Jet magazines and vinyl records (albums) of music of all genres. 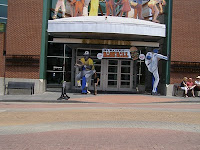 The book club retreat was the following morning (June 12), and KC Girlfriends, along with Chocolate Pages Book Club, put together a very pleasant affair that I thoroughly enjoyed. Despite the fact that the skies opened up and heavy rains fell, the supporters braved the weather and filed into Holiday Inn at the Plaza for great fellowship and a delicious meal. I felt blessed to be in the presence of some wonderful local authors who were also a part of the day's program. Archuleta Chisholm and Rachelle Law were a pleasure to meet and hear, as they also served as speakers during the event. The fellowship among readers and writers who gathered there was delightful. 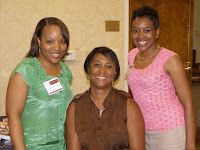 In addition to the opportunity to have face-to-face meetings with some of my loyal readers in the area, the highlight of the retreat for me was meeting a man by the name of Mike Dodson and his wife, Cindi. Only a few weeks earlier, Mike and I spoke via telephone after he was introduced to my work by a devoted "Kendra Norman-Bellamy reader" who (I believe) lives in the Witchita, Kansas area. After never having visited Missouri in my life, God orchestrated it so that I was booked to make an appearance shortly after my telephone conversation with Mike, and in doing so, I was blessed to meet him and his lovely wife when they came to hear me speak at the retreat. My connection with the Dodsons is one of those devine ones that only God could have made happen when, where, and how He made it happen. I hope to be sharing more about that with you at a later date. 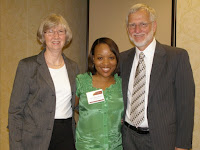 A big THANK YOU goes from my heart to TaNisha and the ladies of KC Girlfriends Book Club as well as the sisters of Chocolate Pages Book Club for rolling out the red carpet. I enjoyed my time with you all, and I hope to do it again some time! 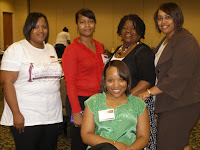 Thanks so much for accepting our invitation to be one of our keynote speakers for this year's literary retreat. We thouroughly enjoyed you and I look forward to having you back in KC for the 2011 Fall into Books Literary Conference.

Kendra,
It was a pleasure meeting you - sharing and having fellowship. You are an inspiration to me and I look forward to us meeting again! Until then, be blessed.