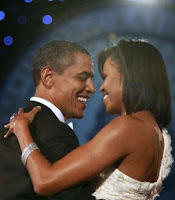 I had so many "moments" yesterday as our 44th President of the United States officially took office that I didn't even try to keep count. When he won the election back in November of last year, I remember being speechless. It was one of those moments that needed no words...if there were any to describe it.

Yesterday, the moments were different. Still somewhat indescribable, but on a much different level. Yesterday made it all real, and my emotions varied from one minute to the next.

I clapped and gave my best round of barking (pumping my fist and all) when the name Barack H. Obama was called out over the loud speakers, and he made his grand entrance into the arena where the ceremony was to take place. I laughed as he took the Oath of Office, keeping his poise amidst the fumbled words that were given to him to repeat. I cheered after what I thought was a well-written, amazingly-delivered inaugural speech. I burst into unexplainable tears the first time President and First Lady Obama exited "The Beast" (the name given to the massive car they rode in during the motorcade to The White House) and walked for seven minutes down Pennsylvania Avenue waving and thanking their adoring supporters.

Call me a lover of fairy tales....or maybe it is the romance writer in me. I don't know. But in the mix of all of the wonderfully profound things that went on during the course of the day, my favorite moment of all was the Obamas' first dance during the Neighborhood Inaugural Ball. Every single one of the reactions and emotions that I had to all of the other happenings joined forces (yes...including the barking and fist pumping) and erupted from me during this two or three minute dance to Etta's James's "At Last" as performed by Beyonce'. It was a near-perfect ending to a near-perfect day of celebration.

When I see the Obamas, and when I see what they've accomplished, and when I see where they plan to take this country, and when I see WHO (God) is really in charge and know that He has all power in His hands....I can't help but hope and believe. I'm not making Obama an idol of any kind. I know Who reigns and sits on the throne. I don't expect things to change overnight, and I don't expect President Obama to make all the right choices. But I hold fast to the Word of God that says all things are possible if we just believe.
I believe....do you?
Posted by Kendra Norman at 2:49 PM 2 comments:

I remember being in my early weeks as a senior in high school when then President Ronald Reagan, though reluctantly, signed a bill that created a holiday honoring the life of Dr. Martin Luther King Jr. In my Senior Memory Book commemorating my 1984 graduation, I wrote down that moment - the signing of the bill - as the most memorable day of my senior year.
There was a time in my life that I was beyond fascinated by Dr. King. Not just for what he'd done, but I was captivated by who he was...the man. As a child, I thought that he bore an odd, but distinct, resemblence to my dad. Both physically and otherwise. The relatively short statue, the calculated speech, the identical mustaches and similar lips, the title of "Reverend"...they all added up to make me feel like I had some strange personal connection with "the King." Maybe I did...maybe I still do...maybe we all do.

As a young writer, before I even knew I was a writer; some of my earliest poems were about Dr. King. His life. His ministry. His impact. His dream. In fact, it was a poem I wrote about him that won me my first literary award. I was honored with being named the winner of the citywide poetry contest in my then hometown of Valdosta, Georgia in 1992 for a poem I wrote simply entitled, Dr. Martin Luther King. I still have the $50.00 American Express savings bond that was the grand prize (smile). In a sense, it can be said that Dr. King and the impact of his legacy on my life played a pivotal role in the launch of my career as a writer. It would be a few years later before I would pick up a pen to write an actual novel, but the foundation had been laid.
So today...on this Martin Luther King Day of 2009, I salute a man who I never knew. A man I never had the priviledge to meet. A man who died at the young age of thirty-nine, yet lived a life that was fuller and more accomplishing than many men who live to be twice as old. A man whose existence impacted the lives of many little girls just like me, who were barely learning to walk and talk as he was being laid to rest. Today, I celebrate and thank God for the life and legacy of Dr. Martin Luther King, Jr.

Words from a Mother's Heart 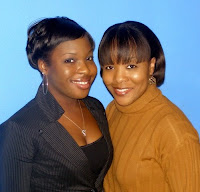 I recall the day I became a national bestselling author. It was September 2005, and the book that marked that monumental moment for me was Crossing Jhordan's River (Moody Publishers/Lift Every Voice imprint), my third novel. Since that time, God has truly shown me much favor. Between then and now, six more of my titles have graced the Essence magazine's Best Selling Books list, making me a 7-time national bestseller. It's an humbling honor that I don't take for granted.

The first time I made "the list," I can remember thinking that it would be incredibly difficult for any happening in my literary life to measure up to that moment. I've been immeasureably grateful and elated every time I've made the list, but there has always been something about that first time that made it more special and more memorable than all the others. That moment - the moment Crossing Jhordan's River made the list - had never been rivaled...until now.

Today, my heart is overwhelmed. Thanks to the sales of her novel, Testing Relationships (Urban Books/Urban Christian imprint), my daughter, Brittney Holmes, made the list (see Essence magazine's February 2009 issue). And I found myself overjoyed beyond belief. Far more so than I was when I saw my name etched among the elite four years ago. Today I laughed louder, cried harder, and celebrated longer than I ever did for myself. My baby made the list! It was a prayer answered, and I took joy in calling her in her dorm on the campus of University of Georgia to inform her of the honor. While she released gleeful screams, I cried some more. The same glee motivated my tears.

It sounds so cliche' at times when we hear it said that parents want their children to be even more blessed than they, or to obtain greater achievements than they did. But what I felt today brought so much validation to that age-old adage. I was 38 when I became a national bestselling author. Brittney is 19. It was my third book. It's her second. She's on track to achieve above and beyond what her mother achieves, and I don't think I could be happier or prouder if I'd tried.