This Tree Preached A Message... 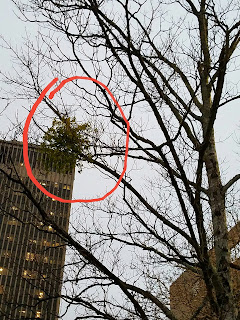 There's this tree that sits among many trees in the parking lot of my workplace that has fascinated me for many weeks. There have been days that I've stood at the window behind my desk and just stared out at it. On several occasions, I've said to one of my co-workers, "There's a message in that tree. God is trying to say something." And today, I finally got the message that this tree was preaching.

Right now, we're in the dead of winter. We've seen some pretty harsh temperatures that fell below freezing during this season. We had threats of snowfall and ice cold winds to rip through our city. There are at least two dozen trees planted in our parking lot's landscaping, and most (if not all) of them are the same kind of tree. They all look alike, but there's something peculiar about one of them. When the fall came in, every tree on the grounds went through the leaf-changing process. Leaves turned red... then yellow... then brown... and ultimately fell to the ground. Dead. What has kept me fixated is the fact that every single tree in the parking lot has been completely bare for months... except this one. See the red circle in the picture?

The red circle marks this one area of this one branch of this one tree that has refused to die. Lifelessness surrounds it, but hasn't phased it. Not only have these leaves not fallen off, but they've never turned brown, orange, or even yellow. The world around them changed, but it didn't change them. The bone-chilling temperatures and the high winds that made every leaf on every branch of all the other trees tremble and eventually fall to the ground haven't done the same to these. Every limb of every branch of every tree in the parking lot is in the same environment, but they aren't all having the same reaction to the environment.

As I stared out the window at this limb filled with green leaves today, I received a spiritual revelation. This limb represents what we, as Christians, should look like in a dying world. We shouldn't look like everybody else. We shouldn't act or react like everyone else. Just because society changes doesn't mean that we should change. People should look at us in awe; wondering how we can remain strong in the face of adversity. They should see that our faith doesn't falter just because everything isn't going the way we want or expect. We should be just as peculiar as this limb of green leaves because although the world changes, the God we serve is the same yesterday, today, and forever (Hebrews 13:8).

When the weather changed, so did all of the trees in our lot. Only a small remnant--one limb of one tree--remained steadfast. Despite the shift in the atmosphere, these particular leaves continue to thrive and show life. In like fashion, the climate of our nation changed in recent weeks. A new man and a new mindset took his sworn-in place in the White House, and when it happened, many of us who call ourselves Christians changed. What we began saying and doing and how we began acting didn't reflect Christ. Our Christianity seemed to wither, change, and fall to the ground. It was as though our faith, hope, joy, and peace of mind had been rooted in a great man instead of a Great God, and because that man was no longer in the position of power, we became hopeless and lifeless. We began speaking words filled with hatred, bitterness, and death. Except for a small remnant of believers, Christians began looking like all of the other "deadness" in the world.

That's just one example. All throughout our lives, seasons will change. We will go through times of plenty and times of lack. We will have times of gain and times of loss. We will experience times of happiness and times of sadness. As long as we are on this side of life, there will be seasons of good and seasons where things won't be so good. But no matter what, we have to let our light shine before men that they may see our good works and glorify the Father in heaven (Matthew 5:6). We can't be wishy-washy-- preaching today but cussing tomorrow; talking holy but living hellish; standing in the field, but bearing no fruit-- having a form of godliness but denying the power thereof (II Timothy 3:5).

Sometimes when a man or woman is a person of great faith who is determined to remain that way regardless of what the majority is doing, saying, or thinking, they are made to feel like the leaves on this tree: isolated and perhaps even ostracized. I know that feeling quite well. A "living holy" existence can be a "living lonely" existence. Staunch Christians don't often have a lot of true friends. We don't follow the crowd and the crowd doesn't often follow us.

In spite of that, we must hold on. We must be steadfast, unmovable, always abounding in the work of the Lord (I Corinthians 15:58). When the climate changes around us, it shouldn't change the Christ within us. With our lives we should always preach the Word; in season and out of season (II Timothy 4:2). Even when we rebuke the sins of the world and voice our disdain about the wrongdoings that are happening in our society, it should be done in a manner that never disconnects from our life source; GOD. Our reflection of Christ should remain in tact. Our "tree" should be planted by rivers of water, and our leaves shouldn't wither (Psalm 1:3) We should never change colors. We should never shrink and shrivel to the level of the world. We should never lower ourselves (fall) to the ground like dead leaves.

This tree preached a message today. Not the bigger part of the tree that changed with the climate; gave up and gave in; but the remnant: the leaves that through it all, refused to fall down and die.