I'm convinced that there's just nothing like the simple things in life. For me, today has been one of the best Memorial Days in recent memory, and it has nothing to do with the typical celebrations that consist of grilled food, cold drinks, or dwelling among a host of friends. As a matter of fact, I never got out of my pajamas today, and there wasn't a pork rib or a piece of barbecue chicken anywhere near my house. Today, for me, was a day of reflection and memories...and all of it was unplanned.
My day started with a very late arising. I was up until almost 4:00 this morning because the writing bug bit me very late last night, and the creative juices were running so freely that I didn't want to stop until the river slowed. That was the reason for my late bedtime, and ultimately, it was the reason for my eyes not opening until 12:02 this afternoon. Once I got up and moving, I fired up my computer and began returning personal and business emails. Yes, it's a holiday, and technically, KNB Publications was closed for business, but I found myself working in spite of today's date.
After an hour or so, I took a break from my computer and began doing a little house cleaning. My husband was on his laptop taking care of a little business in his space, and I gave my daughter permission to attend a cookout at a friend's house, so my house was very quiet for most of today. As I was cleaning, I ran across a few greeting cards that I'd recently received for Valentine's Day and Mother's Day, and I as I 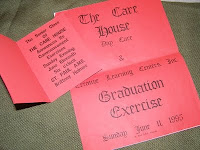 pulled out the drawer in which I normally file away keepsake cards, I noted that it was too full to accomodate my latest collection. I hadn't gone through this drawer in years, so I thought I'd take a moment to do so and perhaps, throw away some things in the process.
As I embarked on what should have been a small and short-order task, the drawer became a treasure chest of memories for me, and for that reason, Memorial Day seemed like the perfect time to have decided to do this impromptu cleaning. I smiled jus tabout the entire time as I pulled out stuff that I didn't even know I had, such as the original graduation invitation and graduation program that dated back to June 11, 1995, the date that my firstborn 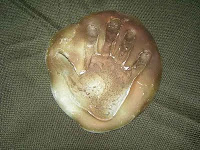 daughter (now a 21-year-old rising college senior) graduated from the daycare center where she got her earliest learning experiences as a toddler. Although that paperwork is now sixteen years old, it wasn't the oldest keepsake item that I found in the drawer. Soon after I discovered her daycare graduation papers, I found the cement handprint of a child. My first thought was that it was either something that one of my daughters had done in grade school, or it was a mold of my 14-year-old godson's hand, since he often came to stay with us when he was much younger. Well to my shock, I flipped the mold over and 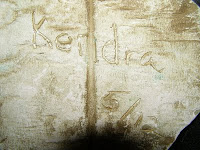 saw my name and the date of 5/72 (May 1972) carved into the molding. That little hand was mine at the age of five. I almost got emotional at the sight of it. That was my little hand! How cool!
Other things I found actually did make me a little emotional. There was a 220-page wirebound notebook in the drawer that had 219 blank pages. Only one page had words on it, and they were in my hand writing. It was a documentation of the last three days of my first husband's life. He was bedridden at the time, and I was his primary caregiver. I 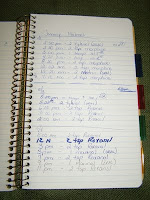 was administering his medicines and was keeping written documentation of each med I administered, the doseage of each that I gave him, and the time that I gave them to him. It was a bittersweet find, but it is still a memory that I would dare not discard. As a matter of fact, very few of the items that I pulled from the drawer were disposable. The memories they brought back were too fond. There were report cards from my daughters' school days, old printed programs from my childhood church home, newspaper articles that I wrote (as the reporter of my high school's FHA club) for the city newspaper, and an August 1981 edition of Ebony magazine with Jermaine Jackson on the cover(because when every other little girl in the world was in love with Michael, I was crushing on his older brother). I even found the printed program from my own high school graduation...an event that took place almost 27 years ago.
The find that held my attention the longest was a Dream Journal that I'd

totally forgotten I had. My first entry in it is dated for January 5, 2003. Over the course of 30 days, I wrote in that journal almost daily. I don't know why I stopped, but as I read through all of the entries that I made, I was amazed to find that God has turned many of those dreams I had into reality. From my "dream" of being able to leave my 9 to 5 to become a full time writer, to my dream to becoming a national bestselling author, to my dream of seeing my daughters grow in grace and became beautiful women of God. All of those dreams that I put in writing back in 2003 have come true, and I'm grateful. Inside the journal, I also have documentation of some actual nighttime dreams that I had back then, and I'm thrilled that I wrote them down because I'd forgotten about them over the years, and being reminded of them through the words in the journal has been a refreshing experience.
Memorial Day 2011 has truly been about memories. Life is fleeting, and time passes so quickly that more and more, I am learning to cherish memories for the priceless jewels that they are. Happy Memorial Day to me...
Posted by Kendra Norman at 9:23 PM 4 comments: