Make That A Triple!

Happy New Year to all of those who take the time to read the Blessed 2 Write Blog. I hope this year has gotten off to a great start for you. I believe that 2010 is a year of great things. During the Watch Night Service at my church here in Atlanta, Bishop Johnathan and Co-Pastor Toni Alvarado tag teamed together and preached a message titled "Continuing With The Lord." That's my aim, and I hope you'll make it yours too. I believe that by doing so, God will allow us to reap great rewards. Amen? Okay....that's the end of my mini-sermon. Now on to the blog! :-)
I'd announced on a few online forums a couple of weeks ago, that God had

handed me a double blessing in the month of January. Well, make that a triple! The year 2010 has met me with three wonderful honors thus far....To God Be The Glory!
First, I was one of the recipients of the "Best Series Books of the Decade" award, which is an honor that was given to twenty African American authors by Ella Curry and EDC Creations. The award recognizes authors who the judging committee viewed as those who rendered the most outstanding series books between the years 2000-2009. This honor is particularly humbling for me because the judges didn't just focus on Christian fiction books. They looked at all of the books of every fiction genre that was released from every African American author over the past ten years and named those that they felt had written the best series. And my books in the Shelton Heights Series (In Greene Pastures, Battle of Jericho, and The Lyons Den) made the list! 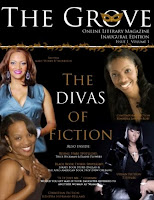 My second honor was to be chosen to grace the cover of the new "The Grove" online literary magazine. The magazine's creator, Brian W. Smith, approached me several weeks ago and asked if I would consider being one of the authors that he would feature in his inaugural issue. The edition released a couple at the beginning of the year. In it are insightful interviews that were conducted with me and the other cover authors: Mary "Honey B" Morrison, Kimberla Lawson Roby, and T-Styles. To read the online magazine, click HERE. This particular complimentary edition will be available online for viewing through the end of January 2010. If you'd like to have access to future issues, subscriptions are available on the website as well. To read the magazine, click on the upper right corner of each page to make them turn. Technology is amazing, isn't it? :-)

The third honor I received was that for the first time, one of my novels was chosen as a "Featured Pick" by Black Expressions Book Club. Several of my novels have been made available in the hardcopy format through Black Expressions, and many of them have been chosen as "alternate picks," but my new January release, The Morning After (with co-author, Hank Stewart) is the first to be chosen a "featured pick." This may seem like a small thing to some, but for me, it was a prayer answered, and I consider it a blessing and an honor. If you are a member of Black Expressions Book Club, please consider accepting the automatic shipment of this book and add it to your library. The Morning After is the long-awaited sequel to Three Fifty-Seven A.M., and is the final installment in what has been dubbed the "God's Timing Series." Pick up a copy wherever books are sold. I'm certain that you will enjoy reading this dramatic and inspiring story.
I'm grateful for the early blessings that I have enjoyed in the year 2010, and as I thank God for those, I also thank Him in advance for those that I pray are to come.
Posted by Kendra Norman at 2:53 AM No comments: