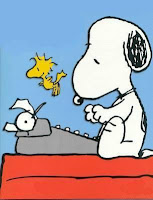 I'm not one of those fortunate people who can eat all they want and never have to exercise or worry about weight gain. Those people, quite frankly, make me sick. I'm kidding (but not really). I'm also not one of those "either/or" people who can get by with either eating right or exercising. As a health advocate, I have done extensive reading and research to self-educate myself on which foods will render a healthy dose of good nourishment without packing on the pounds. And in the six years that I spent as a certified group fitness instructor, teaching aerobics classes at various local gyms across metropolitan Atlanta, I was well-versed in what to do in order to build a healthy heart and fit body. But what I have found is that if I eat right and don't exercise regularly...or exercise and don't eat properly, I fail in my efforts to keep fit. If I want to maintain a healthy weight, I have to do both. I know that to be true because in the last four months, I've maintained a relatively healthy diet, but due to my heavy workload, I didn't make the time to exercise like I should have. As a result, I've gained six pounds. Ughhhh...those evil little scale crushers!
Monday morning, for the first time since the end of August, I got out of bed, and after spending time in prayer and meditiation, I hit the gym. The one hour session that had become second nature for me months ago was tedious to get through today. I had to pep talk my way through those miles that I walked the threadmill on an uphill incline. And when I erased the incline so that I could throw in a few high speed sprints on level grounding, I found myself switching from pep talking to downright praying. By the time I made it to the weight bench and began churning out chest presses, bicep curls, and tricep dips, I was ready to start speaking in tongues. And those crunches... Man! What a difference (and not in a good way) that four-month hiatus from the gym made. I have truly learned my lesson. Getting back on the exercise wagon wasn't easy, but I've done it. The hardest part - that first day - is behind me, and I'm back on track now, and the strides of day one already have me pumped up to take on day two.
The point I'm trying to make (I took the long route to make this point because the long route burns more calories) is that if you want to do anything well, and if you desire for it to become less of a chore, you've got to do it regularly. A few more daily visits to the gym, and my workouts 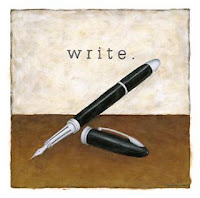 will become second nature once again. That's just the way it is. The more you do a thing, the more natural it becomes. It may not be easy, and it may call for a little schedule shifting and a little sacrifice, but once you get accustomed to doing it routinely, it becomes a normal part of your daily schedule. And that includes PROCRASTINATING. That's right. The more you put things off, the easier it becomes to put things off. Like my exercising. Notice I said because of my workload, I didn't make the time to exercise. It wasn't that I couldn't exercise, I just didn't make it a priority.
Anyone who has taken any of my Writer's Cocoon Workshops have heard me say it. Writer's write. Anybody can talk about writing a book, but only a writer actually writes one. Talk is cheap....and useless without following it up with action. I'm a firm believer that anything you want to accomplish, you'll do what you have to do to accomplish it. You may have a full day of activities on your schedule. Work....family....laundry....cooking....cleaning....eating....most of us share those duties. They are not viable excuses. If you want to get that book written, you have to make the time to do it. Plain and simple. Donate thirty of those minutes that you spend sitting in front of the television. Sacrifice fifteen minutes of sleep time. Better yet, give your writing at least one of those four hours you spend on Facebook, MySpace, and Twitter telling everybody in cyberspace your business. Use that time to hit the literary gym. Exercise your creative writing skills. Put that energy into lifting a pen and pad or burning calories by allowing your fingers to dance across a computer keyboard as you type out that manuscript. Lose the fat of procrastination and build the muscle of achievement! It will be a challenge at first, but mark my words...the more you do it, the easier it will be come.
There is an old church song that says, "I believe I'll run on and see what the end is gonna be..." The only way we will ever see our literary goals achieved is by daring to get in the uncomfortable position of taking the first step. Once we've done that, the hardest part is over. The finish line is within reach....
Run on...walk on...write on!
Posted by Kendra Norman at 1:06 AM 1 comment:

Happy Birthday To Me

Life is so beautiful. It's not always easy. It's not always what we expect. There are times when we struggle, times when we are sick, times that we are mistreated, times when life throws us curve balls, times when we grieve devastating losses, and even times when we think it can't get any worse. But regardless of its challenges and pitfalls, life is still beautiful, and I'd prefer it over the alternative anyday.
On December 17th, I celebrated my 43rd birthday....to God be the glory! Yes, I know that each year that passes is a reminder of the aging process, and maybe I'm crazy....but with each passing year, I feel younger and more zestful than ever. It's not because I'm rolling in dough or living in the lap of luxury. I'm far from it. In fact, financially, the year 2009 has been the most difficult that I've ever endured as an adult. But on Thursday, my 43rd birthday, I still felt like celebrating all day long.
In fact, the festivities began the night before. One of my best girlfriends treated me to an Atlanta Hawks game. It had been several years since I'd gone to one, and I'm not really a sports fan, but I had a blast just hanging out with my sisterfriend and cheering for the home team. Final score...Atlanta Hawks 110, Memphis Grizzlies 97. On Thursday morning, I got up thanking God for another inhale and exhale; another chance to celebrate life and for the 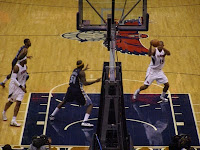 mudslide of blessings that He has given me over the past 43 years. After my morning devotion and getting dressed, I stood by the staircase of my home and called for my older daughter, who is home from college for Christmas break, and asked her to take photos of me so that I could capture year 43 the same why I had done 40, 41, and 42. I don't know...but ever since turning 40, life has had new meaning; a new spice has added that has given it new flavor. I placed the first photo I took as the first one in this post and the last one as the last photo on this post. After my amateur photo shoot, my daughter and I jumped in the car and drove to Radio Shack where I blessed myself with an upgrade from the Sony Ericsson that I'd had for the past two or three years. While so many have now moved up to the iPhone, I'm just reaching BlackBerry status. I chose the BlackBerry Curve 8900 and have spent hours both hating and enjoying the process of learning how to use it (I think I've finally gotten the hang of it though). 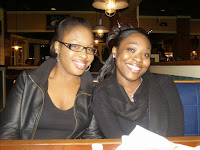 When my younger daughter arrived home from high school, we were making plans for my birthday dinner. It's an annual event for me. Every birthday, my one wish is that my family and I all go out and eat together. But like I said...sometimes life throws curve balls. En route from work, my husband got stuck in a major traffic jam behind a five-car accident that had all lanes of the highway closed. Time ticked away as he sat frustrated on the interstate. Finally he called and said for the girls and me to go out, promising that we'd do something as a family later. Our plans were forced to change, but the dinner was still a treat. I thoroughly enjoyed what had become a girls' night out as my daughters and I dined at Chilli's, one of my favorite eaterys. 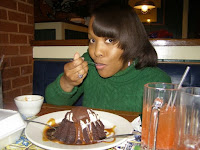 After feasting on a basket of chips and salsa, I chose shrimp and fries as my celebratory meal. Simple but delicious. The waiter gave me a free dessert (chocolate cake and ice cream) to mark the occasion (thank goodness I didn't have to endure the embarrassment of a stream of servers standing over me clapping and singing off-key). I broke every one of my eating rules when I ate that dessert, but oh well... :-)
December 17th was a day filled with cards, gifts, food, photos.....and writing. Oh come on...you knew I had to get some writing done, right? What's a birthday without writing (LOL). I received tons of thoughtful well-wishes on my Facebook, MySpace, and Tagged 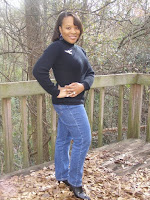 networks......some from people I know and others I don't, but I was grateful for each and every one. I am extremely appreciative for all the gifts, both virtual and actual that I received, but as with most people, I have a personal favorite among them. What was my favorite gift to mark my 43rd birthday? A serenade. I received a special rendition of "Happy Birthday" by way of a phone call from my all-time favorite gospel singer....a six-time Grammy nominated, 3-time Stellar Award winning legend. If you really know me, you know who that is. If you don't know who it is, I'll just leave you guessing (smile).