The Thrill Is NOT Gone

Very shortly after the death of Michael Jackson was announced and confirmed on Thursday (June 25, 2009), I became very aware of one significant thing. And that is that I am one of only about eight people in the entire world who was never a fan of this music giant.

Don't get me wrong. I've never denied his worth, his genius, his status, or his talent. I've always been awed by the way Michael could move; especially as he matured in years. Even as a man in his forties, he seemed to have the energy level of entertainers half his age. So my lack of "fanhood" (if there is such a word) had nothing to do with Michael's gift. It probably had more to do with my upbringing than anything else.

As the daughter of two preachers who was raised in a home where only gospel music was allowed (unless you count the jingles that were heard on television commercials), I was never introduced to Michael in his early career. I never had a Jackson Five album or a Michael Jackson poster like most girls in my generation probably did. Even as I grew into adulthood and moved out on my own, I was never drawn to his music. To me, he was just another young, gifted, African American artist who had been blessed to make it big in the music industry.

Shame on me? No...not as far as I'm concerned. I was never drawn to what was labeled as "pop music." When I began venturing out and listening to secular music, I was far more drawn to jazz and to those men of music who were known for being romantic balladeers in the R&B arena. Everybody has the right to choose their favorite music and favorite artists, right? Last I 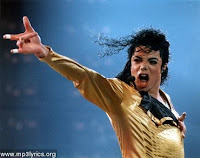 checked, we still lived in America where we have the freedom to choose. To this day, the only album of Michael's that I own is "Thriller," and I forgot I owned that one until my husband reminded me just today. But with all of that being said, it still doesn't mean that I don't respect the larger-than-life image that Michael earned in his years as an artist. I do. I think he was one of the greatest entertainers to ever walk out on a stage. No one could light up a stage like he could. Let's face it: Michael Jackson was absolutely phenomenal! No one could command the attention that he could. With a single swing of his hip, or with one release of that famed high-pitched "Heee-Heee" of his, he could send a crowd into a frenzy. Grown men would be screaming like little girls. Grown women would be crying like babies. The Gheri Curl, the white glove, the high water pants, the leather jackets, the signature sunglasses....whew! It all would have looked crazy on the average brotha, but Michael pulled it off beautifully. Not to mention the Moonwalk! How'd he even think of creating that move? It was genius...pure genius. There was never another one before him, and there won't be one after him.

Though I haven't been a loyal follower of his music over the decades, one thing I have respected about him for years is his gift for writing. Michael knew how to write a song that told a story. 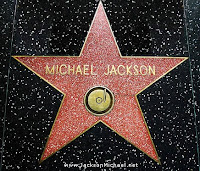 Sometimes it was his story, and other times it may have been somebody else's story. But there always seemed to be a story behind his music, and as a writer, I definitely take my hat off to him for that. I find that the lyrics to many of the songs that top the music charts today are saying absolutely nothing. But when Michael Jackson sang, if you looked beyond the show-stopping dance steps and listened to the words, you would hear a story.

Yes, Virginia...There is an Opelika 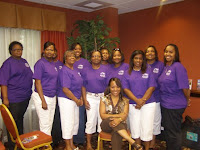 Last weekend, I traveled to a city just outside of Auburn, Alabama called Opelika. I'd heard of it before, but to my knowledge, I'd never been there.

Some weeks ago, I was contacted by Marion Sankey, president of G.O.S.S.I.P. (Gathering Of Spiritual Sisters In Peace) Book Club (see top left photo), and my presence was requested for their June meeting. During my online exchanges with Marion, I introduced her to the writings of my daughter, bestselling teen author, Brittney Holmes, and suggested that they have us both join them.

Marion took the idea back to the book club, and

the rest became history. What began as a regularly scheduled book club meeting turned into something more. Much, much more. In addition to the book club members, approximately fifty other members of the Opelika community joined me in a private room of the Hampton Inn Suites to enjoy some tasty finger foods and to discuss One Prayer Away, their pick of the month. And while I was fellowshipping with them, Brittney was in the open dining area of the Hampton, discussing her debut novel, Living Consquences, with nearly twenty of the area's teen and young adult readers. Both Brittney and I had a marvelous time with these groups.

And the fellowship didn't end there. On Sunday morning, we attended worship services at Greater Peace Missionary Baptist Church, pastored by Rev. Clifford E. Jones. The majority of G.O.S.S.I.P.'s members are also members of Greater Peace. We had a wonderful fellowship there and was able to sell a few books at the close of the service. To cap off the weekend, Brittney and I were treated to a delicious meal at Red Lobster before hitting the road to head back to Atlanta.

What a delightful experience! Brittney and I had a blast and we met some lovely people in the

process. Everyone who knows me knows that I feel particular blessed when I get the opportunity to make appearances with my daughter. She's become an old pro in the almost three years that she's been a published author. I'm so proud of her.

And G.O.S.S.I.P. Book Club was a gracious host! This book club puts Opelika on the map, for sure. I am already looking forward to returning to meet with them in the near future. They are preparing to read Three Fifty-Seven A.M. in the coming months, and I can hardly wait to hear their feedback on that one!