Cruisin' For Christ III: From Glory to Glory 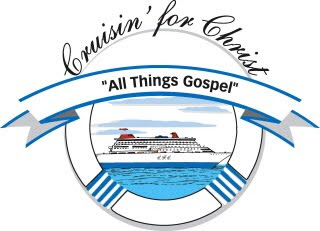 September 5-12, 2009 marked the dates of the third launching of Cruisin' For Christ, and my, what a magnificent experience it was! Not only did this year's mission bring our largest attendance ever, but it was also the most extraordinary mission to date. Registered guests from all over the United States, and even some from as far as Canada, boarded the Carnival Glory in Orlando, Florida, and were blessed by the full week of events that our agenda entailed. Each year, the planning and organizing of Cruisin' For Christ is a difficult task, but this year, the challenge was greater than ever before. Over the years, scripture lessons have taught me that "the greater the battle, the greater the blessing," and it held true to this year's cruise. I knew that there was a

great reward awaiting all of us once we crossed the threshold and boarded the ship. And indeed there was! From the initial gathering on the evening of our first day at sea, God's presence was there in the midst, and it all just got better with each passing day.
This year, we visited ports in Costa Maya and Cozumel, Mexico, as well as Belize City, Belize and Nassau, Bahamas. There was fellowship on the ship and fun in the sun that registrants won't soon forget. As always, Cruisin' For Christ highlighted some respected names in the gospel industry. Featured guests this year included Stellar Award winner, Jonathan Nelson (of Jonathan Nelson & Purpose) and Stellar and Dove Award winner, Melvin Williams (of the legendary group, The Williams Brothers). Other featured

, Jackie Moore, Adrian Bellamy, and Coylette James.
Not only were cruise goers blessed to enjoy some show-stopping, boat-rocking, high-praising concerts, but Cruisin' For Christ offered a wealth of valuable information by way of educational workshops that highlighted an array of important topics from worship mentorship to HIV/AIDS awareness to how to manage stress in kingdom careers. The spiritual and women's empowerment seminars were highly applauded, and attendees raved about the sessions set aside specifically for single Christians and married couples. In addition, there were enlightening panel discussions where topics of ministering through Christian writing (fiction and nonfiction), Christian music (gospel and inspirational), and Christian

entertainment (acting, comedy, and mime) were expounded upon through lively moderated Q&A sessions between our featured guests and our onboard registrants.
Our time of worship during Sunday morning service was spiritually rejuvenating, and the night that was set aside to honor the founder - that would be me :-) - was beyond special as several of the artists performed and the attendees packed out the space, dressed in their best formal wear. Though organized and

structured, the agenda for Cruisin' For Christ III was also a boatload (pun intended) of fun. Edward Watson (aka DJ E. Double U) of the renowned Go Ye DJs was a mix master extraordinaire as he played the hot music mixes that kept us clapping, singing, and dancing during CFC's onboard signature Praise Party and the Old School Jam. And the sightseeing was a beautiful experience during our times on each island that we visited throughout the wee 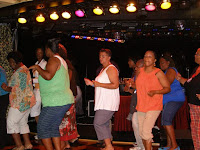 k. Oh, what a time!
When God gave me the vision for Cruisin' For Christ back in 2006, I never saw it becoming the celebrated ministry that it has grown to be. But as phenomenal as these past three missions have been, I know that the best is yet to come. Each time we embark on another CFC venture, the Lord lifts us to a higher wave (pun intended again) of ministry and a deeper level of fellowship. Even through the challenges and trials that come with handling a mammoth undertaking such as this one, God is faithful. He and He alone gets the glory for giving us yet another highly successful conference. But I know that it would not have been what it was without all of the gifted artists

and the registrants who traveled along. So a big CFC "Thank you" goes to each of them.
Wish you had been there? Don't waddle in regret, just join us the next time. We're doing it again, and once more, we will be joined by some of gospel music's finest; along with bestselling authors, celebrated comedians, gifted musicians, and other Christian industry professionals. Our fourth launching will take place in 2011 which gives all who are interested plenty of time to make preparations. Check our website often as 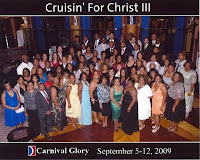 the dates for Cruisin' For Christ IV and an affordable payment installment schedule will soon be posted. You may also refer to the website to see more photos of the 2009 mission (special thanks to APV Images, our official onboard photographer) and to read the feedback that has been posted from many of this year's attendees.
Mark my words...we're taking it to heaven in 2011....Don't miss the boat!
Posted by Kendra Norman at 4:54 PM 4 comments: