There's No Stopping Us Now! 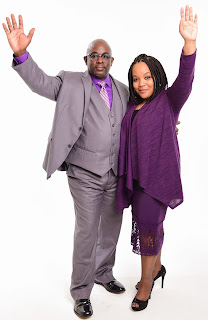 My husband and I are are raising our hands in praise. We're just a few short days away from celebrating our 2nd pastoral anniversary as well as Deliverance Revival Church's 2nd church anniversary and it's been no one but God who has brought us this far. The aged Macon, Georgia edifice that we started out in had been in existence under the same name previously, but had been defunct for a few years before our founder and Chief Apostle reestablished it. We were ordained and installed as co-pastors on the same day that the church's doors were reopened for worship. The date was Sunday, July 10, 2016.

It's such a marvelous thing to be trusted by God. To be called and chosen by Him is an humbling privilege! But we must understand that sometimes it's also a trying and tedious task to carry out His mandates. Especially when the assignment is to "build" a work for Him. I have many long-time ministry colleagues who have been placed in the position of pastor over the years, but I don't recall any who were charged to build a ministry from the ground up. All of the ones I know were either placed over churches that were already established with members, praise teams, choirs, ministry leaders, ushers, etc.; or when they opened the doors of their church, there were already dozens of people walking through the doors with them who had left other ministries to become a part of their new work. These men and women of God are doing great works, and I applaud them. However, their experience is not our testimony. 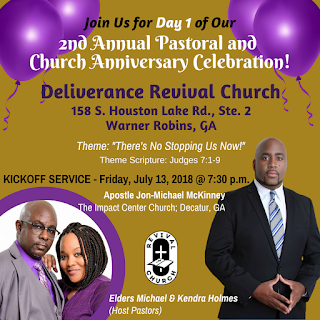 For Pastor Michael and me, there was none of that. We had wonderful family members and friends who attended our installation and initial church launch service, but none of them were members of Deliverance Revival Church. So for the following Sunday after our installation and for several Sundays thereafter, there was no one there on Sundays except Pastor Michael and me. We were the praise team, we were the ushers, we were the ministry staff, we were it all. It's been quite a journey and an experience! Many members have come and some have gone over the past two years. As caring leaders who give our all, we have been hurt by some who we did everything to help. Some have taken advantage of our kindness. Others have blatantly stolen from the church. Then there are those who, after insisting that God sent them to DRC, just disappeared for seemingly no reason. But in spite of it all, we say, "Thank you, Lord!" The Word of God (Romans 8:31) is true... If God be for us, who can be against us? The enemy's ploys have not been successful because our Heavenly Father has been with us every step of the way! It hasn't been easy, but God continues to reward us for our diligence and faithfulness. 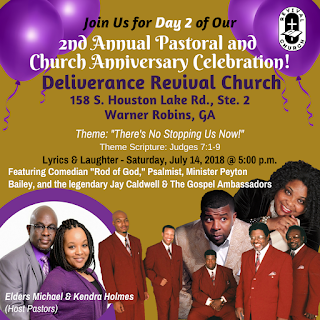 As we prepare to celebrate our 2nd pastoral and church anniversary, we do so with great joy and excitement. In the past year, the Lord has blessed us to move from the old church in Macon, Georgia to a newer, more visible edifice in Warner Robins, Georgia. Whereas we had no musicians when we began, God has blessed us with highly talented ones. Whereas we had no praise team, He has sent us anointed voices to lead us into worship each Sunday. We haven't yet seen the full manifestation of what God is going to do through Deliverance Revival Church, but He has made known His grace and favor upon us and as this year's anniversary theme proclaims... THERE'S NO STOPPING US NOW!

What the enemy meant for bad, God is turning it around for our good. Whereas the devil thought we'd become discouraged and ultimately give up after going through the trials that year one brought, the Lord used those trials to make us stronger and more determined than ever. God has brought us from a mighty long way, and we know that the best is yet to come. We are still few in number compared to many other churches, but DRC is doing a great work in the kingdom, and God is not through with us yet. 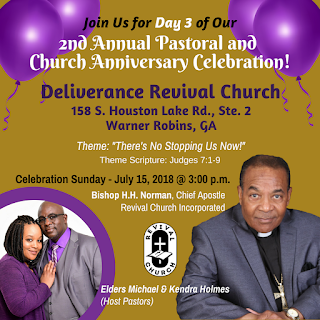 We invite everyone to join us Friday, July 13th through Sunday, July 15th for a 3-day celebratory event that will be unforgettable! We will kick things off on Friday night at 7:30 p.m. with a prophetic experience featuring Apostle Jon-Michael McKinney of The Impact Church (Decatur, GA) as our special guest speaker. Saturday, beginning at 5:00 p.m., we will enjoy an afternoon filled with lyrics and laughter that will feature recording artist and psalmist, Minister Peyton Bailey (Atlanta, GA), comedian Rod "Rod of God" Allison (Kannapolis, NC), and the legendary gospel group, Jay Caldwell & The Gospel Ambassadors (New Castle, DE). We will culminate on Sunday afternoon at 3:00 p.m. with our founder and Chief Apostle, Bishop H.H. Norman (Macon, GA) serving as our guest speaker. All are invited to come and enjoy this celebration with us. The devil was messing, but God is still blessing. We've said it once, and we'll say it again: THERE'S NO STOPPING US NOW!

Posted by Kendra Norman at 9:48 PM

I love the theme. Just know that God is Greater and His hands shows all over you. Blessings to you both. I was blessed to meet you both. It wasn't by accident. I thank God for you both. ❤